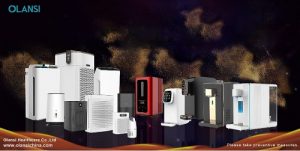 1. Removal of formaldehyde in the decoration room

If the smog still bullies people by region and season, formaldehyde is relatively fair-rural cities are treated the same, winter and summer are not distinguished, as long as you decorate the house, formaldehyde will follow. This year, who doesn’t have one or two newly renovated houses?

The hazards of formaldehyde, every company that makes air purifiers backs up, but when it comes to thorough purification, not every company understands it.

Friends who have done a little research on air purifiers know that most of the filter elements on the market that purify formaldehyde are adsorbed by activated carbon. This method is really effective, especially in the initial stage of purification. However, as time goes by, the adsorption of activated carbon is gradually saturated, and it seems to be incapable of continuing to remove formaldehyde. Even when the temperature rises, the adsorbed formaldehyde is released again, causing secondary pollution. If you don’t want to be hurt by the enemy, the best way is not to lock it up, but to complete humane extinction. It is the same to prevent secondary pollution of formaldehyde.

At present, there are very few purifiers capable of “humane extinction” of formaldehyde in China. The cold catalyst decomposition technology of Olandes air purifier can quickly decompose formaldehyde into carbon dioxide and water that are harmless to the human body under normal temperature and pressure. Without any secondary pollution.

As early as 2008, the Ministry of Environmental Protection of my country issued an announcement showing that among the 519 cities in my country that reported air quality data, only 21 cities reached the first level, accounting for only 4% of the total number.

Two-thirds of a person’s life is spent indoors. According to surveys, the indoor air pollution rate is 5-10 times that of the outdoor. The indoor chemical pollutants such as second-hand smoke, formaldehyde, and radon gas , Benzene series, ozone and peculiar smell, indoor hygiene products may produce carbon dioxide, carbon tetrachloride, dibenzene, toluene, xylene and other toxic substances, which are very harmful to the human body. Long-term exposure to indoor air pollution can easily lead to various diseases such as respiratory diseases, lung cancer, and atherosclerosis.

The above three reasons tell you that it is impossible not to use an air purifier. The multi-layer filtration system of the Olansi air purifier can filter, adsorb and decompose the indoor air pollutants layer by layer to achieve a cleanliness of more than 99.97%.

To purify the air conditioning temporarily not replace purifier

With the improvement of people harmful substances of concern PM2.5, formaldehyde, and gradually into the home air purifier, air conditioning manufacturers have begun production of air conditioners with cleaning function. In one view, air purification air conditioner will replace purifier, but experts believe that [...]

Precautions for choosing an air purifier

It has been over a month since we last saw the blue sky in Delhi. The amount of pollution is such that even at noon, the capital of India looks all wrapped in smog. Worse, it not only makes the city seem hideous and [...]

Haze raging, China has become the hearts of the most difficult to forbear harm. When people “talk about the mere mention of haze”, the air purifier has become a guardian of health, haze nemesis, to help people to reduce formaldehyde, PM2.5 and other violations [...]

Air Purifiers, Air Cleaners, Air Filters— the choices are enormous! How does one make a decision? How do I find the right product for me? The Air Purifier OLANSI is here to help you learn how to make an educated choice. During the course of your [...]

Benefit for home air purifier and why should use it

Olansi Healthcare Co., Ltd is a professional manufacturer of car air purifier, home HEPA air purifier and office air purifier and other healthcare products. It locates in Guangzhou, Guangdong, China. According to a set of data from the World Health Organization, nearly half of the world’s people are exposed [...]