The air we breathe is not as clean as it once was – and in many cases, it is getting worse.

According to a recent study by researchers at UC Berkeley, smog kills about 4,000 people every day in China. And in the US about 4 in 10 people live in counties that have unhealthy levels of either ozone or particle pollution, according to the American Lung Association.

The tower-like device essentially sucks up smog like a vacuum from the top and then releases the filtered air through its six-sided vents. It can clean more than 30,000 cubic metres of air per hour and runs on 1,400 watts of green energy.

The project, which was funded on Kickstarter, took Roosegaarde about three years of research and development, but he is finally showing off the prototype of his giant air purifier this week in Rotterdam. According to Roosegaarde’s website, the air purifier was specifically created to be used in public parks.

Roosegaarde describes how the tower works on its Kickstarter page:

“By charging the Smog Free Tower with a small positive current, an electrode will send positive ions into the air. These ions will attach themselves to fine dust particles.

A negatively charged surface – the counter electrode – will then draw the positive ions in, together with the fine dust particles. The fine dust that would normally harm us, is collected together with the ions and stored inside of the tower. This technology manages to capture ultra-fine smog particles which regular filter systems fail to do.”

But the well-designed air purifier doesn’t just clean up smog, it can also be used to make fine jewellery. 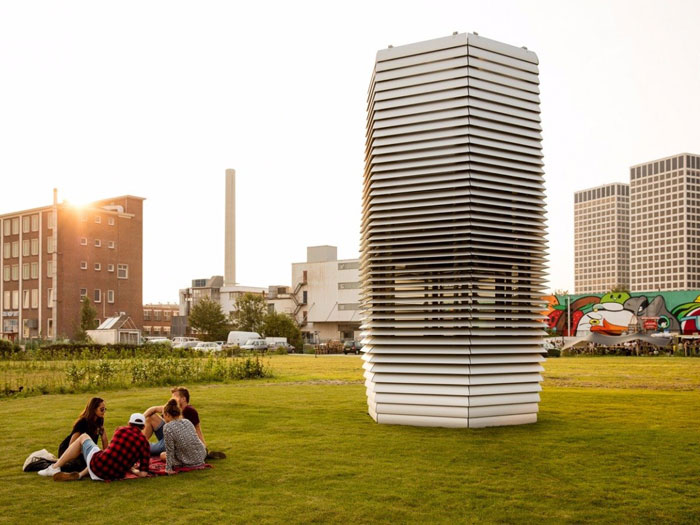 The fine carbon particles that the tower collects can be condensed to create tiny “gem stones” that can be embedded in jewellery pieces like rings and cufflinks. Each of the tiny stones is the equivalent of 1,000 cubic metres of air. While the prototype is currently in Rotterdam, Roosegaarde aims to eventually roll out other models in Beijing, Mexico City, Paris, and Los Angeles.

This article was originally published by Tech Insider.

Recently, a website published 2013 annual consumption China keywords. Among them, the “haze” on the list. The data show that the national Amoy friends against the haze of a spent 870 million yuan. Masks, air purifiers, indoor treadmills and other goods were bought 4 [...]

Something about the car air purifier

BEIJING: Beijing city on Sunday issued its first yellow alert for air pollution in the second half of this year with Met department forecasting that smog will continue to engulf+ the Chinese capital till Monday. he alert puts restrictions on work at construction sites, outdoor [...]

Guangzhou Olansi Healthcare Co., Ltd is a professional china air purifier manufacturer for indoor air purifier. Indoor air pollution is a serious problem.Olansi Tell you why it benefits to install an air purifier in home for your family healthy. air purifier Air purifiers rely on a series [...]

For Fall Allergies Do You Know About This 10 Scary Facts

Fall allergy season is upon us. Yet, despite the seasonal shift bringing welcomed activities like weekend football and trips to the cider mill, we’re also faced with maybe the biggest upswing of harmful airborne allergens all year. Thanks to a drastic increase in ragweed pollen, [...]

A “Smog Free Tower” undergoing tests in Beijing’s famed 798 art zone has sparked controversy amid continuous heavy smog in the last couple of days. The seven-meter-high metal structure, designed by Dutch artist Daan Roosegaarde and introduced to the Chinese capital as the world’s largest [...]