Be wary of secondary pollution, and don’t let the air purifier in your home become a source of pollution.

A new crown epidemic that swept the world has quietly changed people’s daily lives. People are used to wearing masks, washing hands frequently, and disinfecting them frequently, and they have also begun to pay attention to the sterilization and purification of indoor air.

Now it is the season change. People with allergic symptoms are more likely to have nasal congestion, runny nose, sneezing, and itchy throat. Viruses, bacteria, dust mites and other air problems are annoying for everyone.

Therefore, people who want to have a good air environment, especially in the case of insufficient indoor air circulation, need an air purifier with UVC-LED sterilization function.

01
Eliminate secondary pollution, UVC kills 99.9% of pathogenic bacteria
Ordinary air purifiers have no UV sterilization function, but they can’t achieve real sterilization. They can only intercept microorganisms. After intercepted microorganisms stay on the filter, they will regenerate and reproduce and pollute the filter.
The Olansi circulating sterilizer has a built-in self-developed UVC-LED sterilization module, which can effectively kill various bacteria including the new coronavirus, with a sterilization rate of up to 99.9%.

This air purifier uses air convection to inhale the polluted gas with viruses and bacteria into the machine, and uses the 275-280nm ultraviolet light irradiated by the UVC-LED light source to destroy the genetic material DNA/RNA molecular structure of harmful microorganisms in the air. It also has a good killing effect on dust mites and other allergens.

02
Layers of purification, more thorough disinfection effect
In addition, the machine is also equipped with a high-density HEPA filter and a photocatalyst + UVA module with a triple purification device.
The HEPA filter can efficiently filter harmful substances such as formaldehyde, PM2.5, allergens, and second-hand smoke in the air; under the irradiation of UVA, the photocatalyst can oxidize and decompose the pollutants that come into contact with the surface of the photocatalyst coating film, and then release it cleanly , Fresh, odor-free air.

The sterilizer has two working modes: night and normal. Press and hold for 2 seconds to turn on, the white indicator light is always on, which means it is in standby state. At this time, press the power button once to enter the night mode, the fan is working at a low level, and low-decibel operation will not interfere with sleep; press again to enter the normal mode, the fan is working at a large level, the disinfection efficiency is higher, and the indicator light is flashing; press again Hold for 2 seconds to shut down, and the indicator light turns off synchronously.

The sterilizer enters the air at 360° at the bottom, and releases clean air from the top, which can effectively purify the room within 10 square meters. 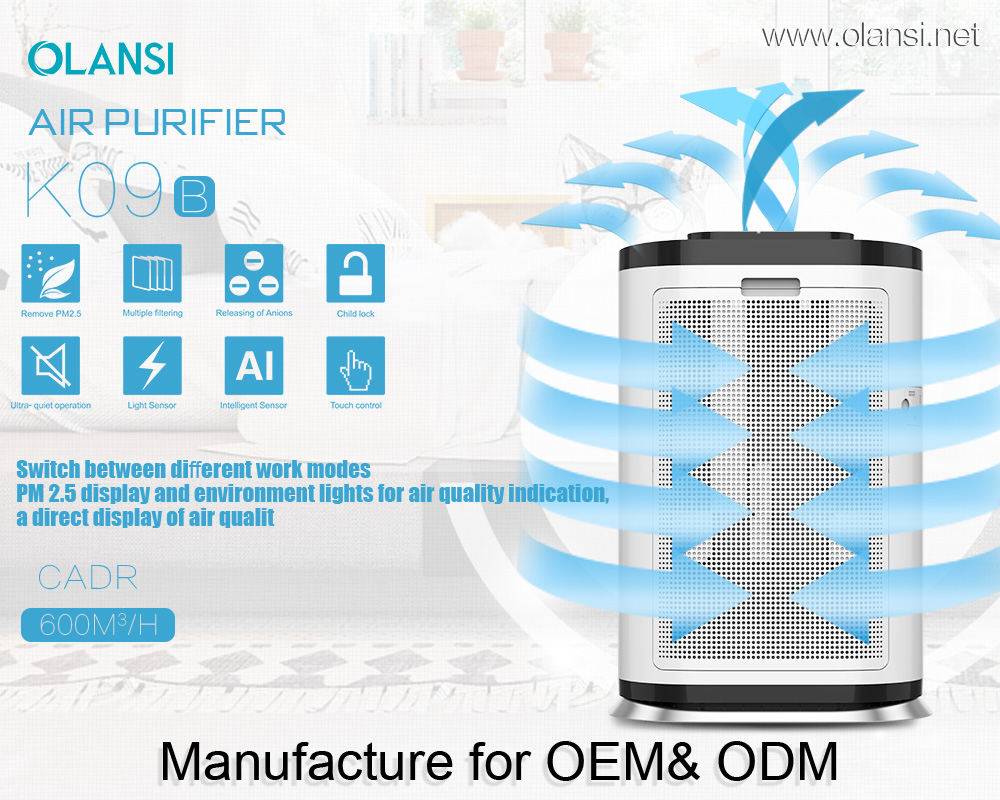 All the light is in the product shell, and it can work safely in a human environment without causing harm to the human body. It can be used safely in office spaces, bedrooms, bathrooms, kitchens, baby rooms, pet rooms, etc.

Integrating disinfection, sterilization, and air purification, the Olansi air circulation disinfector combines daily needs, realistically starts from the safety of the human body, and truly eliminates all hidden dangers in the air.

The necessity of buying an air purifier 2022

The current air pollution problem is very serious. Not only is the external environment unbearable, but you have to wear masks when you go out, and even indoors are affected. Many people have begun to buy air purifiers, which also increases the demand for [...]

OLANSI teach you how to choose an air purifier

The arrival of an epidemic has made us all more deeply realize that health is the greatest wealth. In terms of air environment safety, the ravages of bacteria and viruses, sandstorms, and excessive formaldehyde in new houses have also caused more and more friends [...]